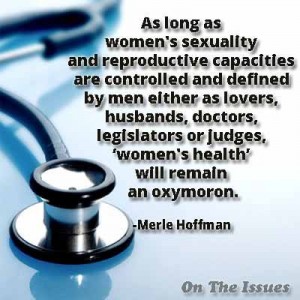 In our preparations for the re-launch of May 28, we at WGNRR have had numbers of discussions about current and pressing issues concerning women[1]‘s health, particularly in terms of women’s SRHR and its inclusion in the Post-2015 Development Agenda.  For me, one of the key issues is aptly summed up in the above quote from Merle Hoffman, abortion rights pioneer and Editor-in-Chief of On the Issues. Basically, unless women themselves in all their diversities are at the centre of drafting women’s health narratives, any Post-2015 approach to women’s SRHR will be limited and imposed at best, and potentially harmful at worst.

This isn’t to say that “women-centrism” will in and of itself result in a holistic, inclusive, and rights-based approach to women’s SRHR in the Post-2015 Agenda. Nor is it meant to overlook the countless numbers of men who are integral allies and activists in the SRHR movement.  It is to say, however, that when it comes to women’s SRHR, women-centrism needs to be one of our starting points, at the very least.

In 1987, activists from around the globe launched May 28 as a means to speak out on women’s SRHR issues, faced by women and girls worldwide. Nearly 30 years on, it remains as critical as ever that we work to ensure that in the Post-2015 Agenda, the voices of women and girls are heard.

[1] While we use the term ‘woman/women’ we do so with a critical reflexivity that recognizes the nuances and right to people’s unique sexual and gender identities and expressions.  We also recognize that ‘women’ are not a monolithic group and that they have diverse identities that vary due to their social location and the socio-economic, political, and multicultural contexts in which their lives are embedded.