“The right of a mother to reproductive health is universal and must be observed at all times, regardless of the detainee’s political belief” – Philippine Senator Pia Cayetano 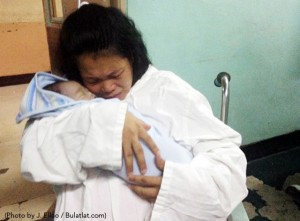 Recently, the Philippine media reported about the death of a newborn baby of a political detainee. Andrea Rosal, who is a daughter of the late spokesman of the Communist Party of the Philippines was arrested on March 27, 2014 and charged with kidnapping and murder.  At the time of her arrest, she was on her seventh month of pregnancy and was heading to her pre-natal check-up when arrested. She was incarcerated in a prison cell that is merely 5 x 10 meters small, cramped with 31 other inmates, and was denied access to the necessary pre-natal check-ups and tests.

When Rosal gave birth to her baby on May 17,  Mother’s Day, the baby died two days after due to persistent pulmonary hypertension. Her death certificate states that she also suffered from neonatal pneumonia and hypoxicischemic encephalopathy, or oxygen deficiency in the blood.

Women in prison, regardless of circumstances, should be accorded with humane treatment, respect on her inherent dignity of person, and should to be free from cruel, inhuman or degrading treatment or punishment. Moreover, her sexual and reproductive health and rights should not be forgotten.

In this case, Andrea is not only a victim of political persecution but was also a victim of denial of basic human right and her right to access reproductive health services.

Pia Cayetano laments Rosal condition vs ‘VIP’ Napoles
Senator Pia Cayetano asks: ‘Was Andrea given sufficient medical attention in prison? Why was there a delay in her transfer to the hospital?’
by Ayee Macaraig
Published 7:21 AM, May 20, 2014
Updated 8:01 AM, May 20, 2014

Cayetano compared the condition of Rosal with the treatment of alleged pork barrel scam mastermind Janet Lim Napoles, who is supposedly using her two-month hospital stay to avoid going back to detention.

The chairperson of the Senate committee on women lamented what she called the “deplorable condition” of ordinary inmates like Rosal compared to Napoles and other high-profile prisoners.

“When we read about how some so-called ‘VIP prisoners’ have used their medical needs as an excuse to avail of hospital detention, it pains me to hear that a detained pregnant woman may have been denied of immediate medical access that could have assured her of a safe pregnancy and could have saved the life of her child,” Cayetano said in a statement on Tuesday, May 20.

Cayetano was responding to the death of two-day-old Diona Andrea Rosal, who died Sunday afternoon due to “persistent pulmonary hypertension.” Human rights group Karapatan said the baby’s mother experienced uterine contractions on May 15 in detention but her transfer to the hospital was delayed despite a court order.

The senator questioned the circumstances that led to the baby’s death. “Was Andrea given sufficient medical attention in prison? Why was there a delay in her transfer to [the Philippine General Hospital] from her prison cell?”

Cayetano cited the statement of Karapatan about Rosal’s condition in jail.

“If a woman 7 months pregnant is locked up in a prison cell that is merely 5 x 10 meters small, cramped with 31 other inmates, and when she is denied access to the necessary pre-natal check-ups and tests, then we are endangering the health and life of both the mother and baby,” Cayetano said.

The principal sponsor of the Reproductive Health (RH) law said that the country’s prison system must ensure that the reproductive health rights and needs of pregnant inmates are addressed. The RH law aims to provide access to various forms of contraception and RH services to poor mothers.

“The right of a mother to reproductive health is universal and must be observed at all times, regardless of the detainee’s political belief,” said Cayetano.

“Pregnancy is a most natural state that may proceed without complications. But being natural does not mean precautions should be ignored. Pregnant women in detention should be given decent living conditions and hospital care, if necessary. Such access should not be denied just because one is a detainee,” she added.

Rosal is the daughter of the late New People’s Army Spokesperson Gregorio “Ka Roger” Rosal. She was arrested on kidnapping, murder and attempted homicide charges on March 27.

The military denied accusations of poor treatment. “For humanitarian (reasons), the government has extended help to both the mother and the child through hospital arrest in PGH, and provided them the best hospital care available,” military spokesperson Lieutenant Colonel Ramon Zagala told Rappler.

“To blame anyone for the death of this infant is both callous and unfair,” Zagala said.

Cayetano said that the government must conduct an investigation to determine whether or not detention facilities for women are equipped to deal with a mother’s maternal health.

She said she hoped the court will grant Rosal’s request to attend her daughter’s wake and burial.

The senator referred to her own experience of losing a child. She has said she lost a son with a chromosomal disorder and a heart problem.

“As a mother who also lost a child, I can sympathize with Andrea and the anguish that she must be going through. She should be allowed to grieve for her baby and given enough time to fully recover physically and psychologically,” Cayetano said. – Rappler.com