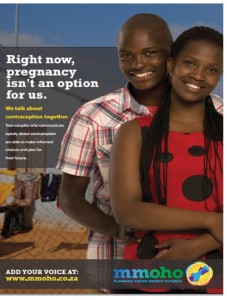 Approximately 30% of teenage women in South Africa have reported being pregnant prior to the age of 18, with the majority of those pregnancies being unplanned.Trends in research indicate that in South Africa relationships are often with multiple partners, between people of an age that is disparate, and show that young men are not taking an active and supportive role in childrearing. These trends are worrying because individual health and well-being is being undermined by a range of differentiating factors, notwithstanding individual sexual behaviour, and which stem from the broader context.

Mmoho is a South African nationwide advocacy campaign seeking to reduce the occurrence of unplanned teenage pregnancies in South Africa. Mmoho is a Sesotho word that means together. Mmoho (which can be found soon at www.mmoho.org.za) works to change the conversation about teenage pregnancy from a ‘shaming and blaming’ discourse that primarily blames young women themselves for unplanned teen pregnancies, and instead employs a positive, rights-based approach to advocate for increased access to contraception for young women and men. The campaign is a clarion call for us all -teenagers, parents, teachers, community members, policymakers, health care workers- to be active participants in the prevention of unplanned pregnancies.

Blaming a young woman for getting pregnant neither prevents the pregnancy nor makes her feel she has the support she needs to make a decision that will work for her; ensuring she has the tools she needs to prevent unplanned pregnancies in the first place (i.e. a full range of contraceptive options to choose from), can talk to someone close to her, and has supportive sexual partner(s) who will actively participate in preventing pregnancies are much more concrete, long-term, and effective strategies.

The determinants of unplanned teenage pregnancy include individual attributes, the social environment as well as structural issues; collectively they have the potential to present outcomes such as teens experiencing early pregnancy and contracting STIs and HIV. Individual characteristics are shaped by the influence that the environment itself brings to bear on the person. The socio-economic status of the family, parental values, parental style, parent-child communication, school environment, peers, role-modelling and so forth exert considerable influence on teen’s sexual behaviour. The day-to-day social environment, in which young people participate and develop, can also have a significant effect on their behaviour.

For example, gender-based violence is a key factor, rape is often reported. The conditional nature of health services – either through physical distance, poor quality of clinical services, lack of privacy and respect, high costs and a culture of shame that surrounds certain conditions that are reinforced by health care workers, makes health care inaccessible, unacceptable and inappropriate. When young people require health services, the public sector is often the last resort. Comprehensive sexuality education, if provided, gives young men and women a strong and positive understanding of their bodies, their rights and choices – if denied or restricted, can contribute to the high rate of teenage pregnancy.