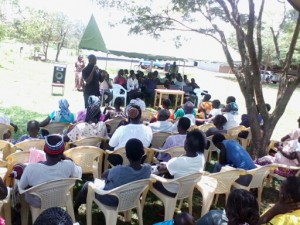 National, international and grassroots organisations are mobilising all over the work to mark May 28 International Day of Action for Women’s Health. On this part of the website we will be reflecting all the reported actions and will create a global map featuring the mobilisations taking place around the work. If you plan an action on May 28, please get in touch with us!

Along with the local mobilisations we encourage to mobilise globally through social media.

Join and invite your friends to support May 28 Thunderclap! Let’s land #May28 message in the trending topics in the social media! To support and share the Thunderclap message, pleaseclick here.

Thunderclap allows to synchronize May 28 social media messaging. If May 28 message gets supported by a target number of people (100), Thunderclap will release May 28 message from all of those supporters at the same time, on the designated date & time – May 28, 2014.  Which allows us to flood the social media sites with our #May28 messaging on #WomensHealth and #SRHRtargetNow!

Invite your friends to support Thunderclap.

MOBILISATIONS AROUND THE WORLD

Coast Women In Development (CWID) will conduct an open forum event where guests speakers are invited to talk about reproductive health and rights. And then women, young women, girls and men will speak out regarding challenges they face in accessing SRHR services and information. After, participants will be posing their signatures in support to the SRHR agenda in NDA document. This will be preceded by a local radio talk Shaw on the same agenda.

Kenya Association for Maternal & Neonatal Health -KAMANEH is planning to organise an public event focused on Access to Sexual and Reproductive Health Rights Information and Services as a human right for women and girls.The event will take place in Miritini Slums, in Chagamwe Sub-County, Mombasa County and in Nyanturago rural Community in Kisii County.

Fortress of Hope will organize a community action in rural Kilifi County, a place called Chonyi . The main target will be 20-30 women and young women living the community. Kilifi County is among the most poor county in Kenya with most of the community members living in absolute poverty. Fortress of Hope will organise a round table discussion on women health and rights aimed at introducing and raising awareness on SRHR issues women face, identifying gaps that exist in the community in seeking SRH information and services ,and identifying SRHR violations common in the community. The following issues will be of focus contraception, abortion, violence against women, HIV /AIDS and sexual rights.

The meeting will culminate with a community call for action on women health and rights to be share with Kilifi county Women Representative, County assembly members and Ministry of Health Representative.

Generation Initiative For Women and Youth Network will orchestrate  a banner drop at strategic places at Owerri and Lagos. Members will call request cards on radio stations for members and allies–( mentioning 28th May – International Day of Action For Women’s Health ), to publicize it as widely as possible. On the 28th there will a discussion forum. The Call for Action Materials will be printed out and shared to every participant. About 50 people will be mobilized, including Community and religious Leaders, Politicians, Women, girls and youths, people living with HIV, and diverse people. The Discussion will be focused on “ Human Right and Women’s Health beyond 2015 : Towards Protecting the Sexual and Reproductive Health of Women

Women’s Promotion Centre will hold a joint public event together with the Western Zone based partners in the Tanzania Safe Abortion Advocacy Project (TSAAP) aiming at raising concerns of women and challenges they face when seeking for SRHR services and information followed by open discussion on what need to be done to address them. It will be preceded by dance and theatre performance where the performers will highlight a number of challenges faced by women in exercising their SRHR. This will be followed by an open discussion on what should be done by government and different social actors, At the same time a joint statement will be collecting signatures from participants before being read in public and handed over to the District Commissioner (expected to be the Guest of honor). The event will also be colored with some campaign materials.

EMPOWERED AT dusk will conduct a street demonstration on VAW as a global health emergency accompanied by a debate on failure of the states to recognize sexual and reproductive rights in their most holistic sense and a street play focusing on Safe and legal abortion.

Social and Development Research and Action Group is implementing a violence against programme in district Gautum Budh nagar.

Sahara aids control society is focusing on issues affecting the safely in delivery by women affected by HIV/AIDS. The work of the organisation mostly takes place in rural and urban poor communities.

Peace Foundation Pakistan is organizing an event on women’s reproductive health and surrounding barriers under topic:   “Women have not reproductive justice despite of conventions, Eastern, Western , religious and social laws”
***

International Community of Women Living with HIV/AIDS Chile  is leading a regional campaign to improve sexual and reproductive rights in Chile and give women the only tool they can control that protects them against HIV/AIDS, STDs and unwanted pregnancy. More information at on the campaign can be found by watching the campaign video and by reading this storyBrasil

Organização de Mulheres Negras will from Salvador de Bahia, Brasil will organise a Vigil to End Maternal Mortality. During the vigil several women will present cases of violations of women’s right to health. A Feminist Vigil is an action of women’s movements in Salvador that happens every last Tuesday of the month.  The Vigil strives to call attention to the fact that women keep loosing their lives, and that maternal death has a color , class and territory, because black women are most affected by this condition.

For the members of Colectivo Feminista Panteras Rosas, it is important to movilize and create public opinion regarding the importance of analyzing the access of women to health services in Nicaragua.  We are going to focus on two topics: one is the importance of decriminalising abortion in Nicaragua (as women are dying due to inappropiate, unhealthy and insecure procedures) and the second topic has to do with deconstructing the myth that health related to women is only reproductive, when there is a diversity of women, most of them young, whom have decided no to get pregnant or give birth.

RODA  is planning to organise two free workshops for pregnant women along with the public release of data on on maternity hospital statistics on www.rodilista.roda.hr. RODA will make a public statement on the data and submit a petition to the EU parliament regarding the lack of choice in childbirth.