Join women’s rights activists around the world in the re-launch of May 28th International Day of Action for Women’s Health, by calling on governments and the international community to ensure a holistic, inclusive, and human rights-based approach to women and girls’ health in the Post-2015 Development Agenda.

In 1987, women’s rights activists declared May 28 as the International Day of Action for Women’s Health, as a means to speak out on Sexual and Reproductive Health and Rights (SRHR) issues faced by women1 and girls all over the world.

Nearly 30 years on, while the challenges obstructing the full realization of all women’s health and wellbeing remain varied and often unaddressed, a disturbing paradigm has persisted: namely, an often limited, narrow and imposed understanding of women’s health, as well as the actual needs of all women and girls in all their diversities.

The Millennium Development Goals (MDGs),2 a set of eight development goals that UN member states and development institutions committed to in 2000, perpetuated this limited understanding by focusing almost exclusively on maternal health, itself defined narrowly by survival numbers and the presence of skilled birth attendants, as opposed to a comprehensive definition which includes women and girls’ autonomy, privacy and dignity rights. By narrowly focusing on maternal health, the MDGs effectively omitted and ignored the commitments governments made at the 1994 International Conference on Population and Development (ICPD), which placed gender equality, women’s empowerment, and sexual and reproductive health and reproductive rights at the heart of sustainable development.3

As we all know, women are not just mothers – we are women and girls of all ages and diverse sexualities; we are women with or without children; women who are single, married or unmarried; women who are living with or are affected by HIV; women with different abilities and disabilities. We are cis-women,4 trans-women, and gender-non-conforming women; we are indigenous women, migrant women, sex workers, and women who work in formal and informal sectors. We are women of different socioeconomic statuses, and women belonging to national or ethnic, religious and linguistic minorities; women, in effect, of multiple and intersecting identities, with diverse health needs over the course of our lives.

In spite of these realities, there is a lack of meaningful commitment on the part of governments to address the diverse nature of women’s sexual and reproductive health issues, as well as promote, protect, and respect our sexual rights and reproductive rights to decide freely upon all aspects of our body, our sexuality and our lives, free form coercion, discrimination and violence.

We need to hold governments accountable to their existing commitments, ensuring that national policies effectively guarantee and support women’s choices and rights. These obligations are not just about governments reaffirming past commitments and repeating words; they are about implementation and taking action towards progressive realization. They are also about addressing existing realities in order to fulfill the rights of women and girls that for too long have been disregarded and even explicitly denied.

As such, it is vital that existing commitments on women and girls’ SRHR not only be included but also strengthened in the Post-2015 Development Agenda.

If one hopes to have a holistic, inclusive, forward-looking, and relevant Post-2015 Development Agenda, we believe women’s health for all, particularly in terms of their SRHR, must be central to the goals and targets, and draw on existing international and regional human rights treaties such as CEDAW,5 Belem do Pará Convention6 and Maputo Protocol,7 and the most progressive international and regional documents and consensus such as the Bali Global Youth Forum Declaration,8 Asian and Pacific Ministerial Declaration on Population and Development9 and the Montevideo Consensus on Population and Development.10

Human rights must be explicitly referenced, with the understanding that “the promotion and protection of sexual rights and reproductive rights are essential for the achievement of social justice and the national, regional and global commitments to the three pillars of sustainable development: social, economic and environmental,”11 and that any meaningful efforts towards transformative and sustainable development must posit people as the drivers of development rather than passive receivers of aid priorities and programming.

As recently asserted by CEDAW, the “failure of a State to provide services and the criminalization of some services that only women require is a violation of women’s reproductive rights and constitutes discrimination against them.”12 Not only is women and girls’ SRHR a human rights issue in and of itself, it is central to their empowerment and achievement of other rights.

When states fail to recognize full sexual rights and reproductive rights, they not only compromise women’s health, they both tolerate and endorse institutional and structural violence towards women and girls, abusing their human rights and perpetuating their marginalization and social exclusion. Any Post-2015 Development Agenda will fail to be transformative if women and girls’ sexual rights and reproductive rights are not meaningfully included as an integral component for equitable and sustainable development. Governments are capable of more, and women and girls in all of their diversities deserve more.

We call on governments to ensure a comprehensive, high-quality, and integrated approach to SRHR, including but not limited to:

THE TIME TO ACT IS NOW!

It’s time for a new narrative on women’s health issues, a narrative drafted and voiced by women themselves, in all their diversities. This May 28, SPEAK OUT AND MOBILIZE in your community about what you see as the urgent priorities for realizing women’s holistic sexual and reproductive health, rights and wellbeing.

Join us and SRHR advocates worldwide in showing governments that a holistic approach to women’s health is about recognizing women’s sexual rights and reproductive rights, and supporting women of all ages in all their diversities as they make sexual and reproductive choices for themselves, throughout their whole lives.

JOIN the May 28th Campaign re-launch by endorsing the Call for Action at www.may28.org

Your contributions will help inform your government’s understanding of women’s SRHR issues and influence the high level discussions at the United Nations on the New Development Agenda in the following months. We want to make sure your voice will be heard!! JOIN US NOW!

This May28th SPREAD THE WORD:

This May 28th ADVOCATE:

Visit and share www.may28.org and learn more about the campaign and learn what you can do in your community! 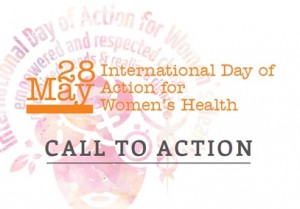 List of Organizations Endorsing the Call to Action as of May 28, 2014

While we use the term ‘woman/women’ we do so with a critical reflexivity that recognizes the nuances and right to people’s unique sexual and gender identities and expressions. We also recognize that ‘women’ are not a monolithic group and that they have diverse identities that vary due to their social location and the socio-economic, political, and multicultural contexts in which their lives are embedded.↩